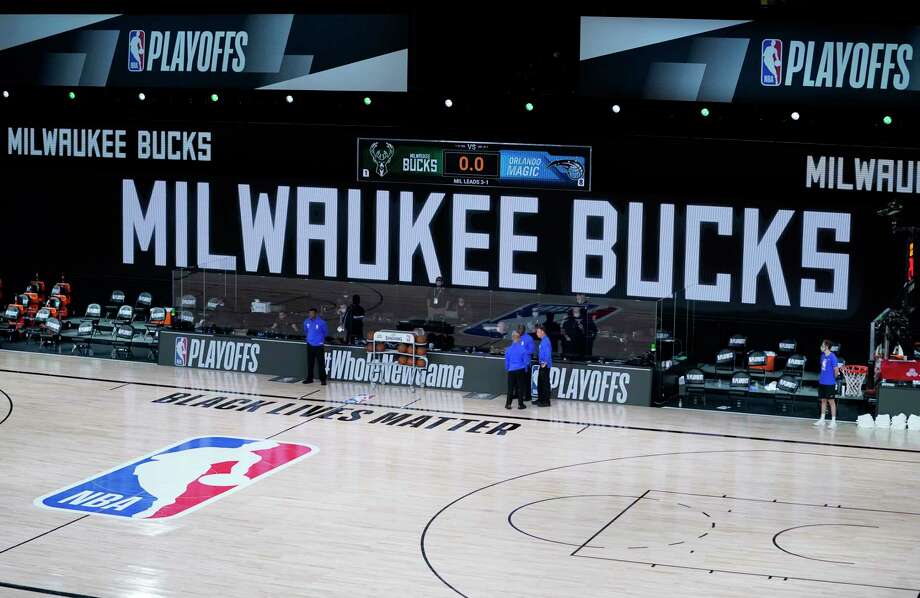 Officials stand beside an empty court before the scheduled start of an NBA basketball first round playoff game between the Milwaukee Bucks and the Orlando Magic, Wednesday, Aug. 26, 2020, in Lake Buena Vista, Fla. (AP Photo/Ashley Landis, Pool)

When it was time to tip off Game 5 of the Milwaukee Bucks-Orlando Magic series on Wednesday afternoon, no one from either team was on the court.

Multiple players in the NBA bubble have discussed sitting out games and even leaving Florida after the police shooting of Jacob Blake. Shortly after the scheduled game time, ESPN’s Adrian Wojnarowski tweeted that the Bucks will boycott the game.

Orlando Magic players had been on the court for pregame warmups but left well before game time. Bucks players never took the court.

Bucks guard George Hill told Marc J. Spears of The Undefeated that they weren’t playing because “we’re tired of the killings and the injustice.” Nuggets guard Jamal Murray, whose team is scheduled to play the Jazz on Thursday, tweeted: “WE DEMAND JUSTICE!!!” The Lakers’ LeBron James, who is supposed to play the Blazers on Wednesday night, tweeted: “F— this, man. We demand change. Sick of it.”

Blake, a Black man, was shot seven times in the back by police on Sunday in Kenosha, Wisc., about 40 miles south of Milwaukee, as he attempted to enter his vehicle where his three children were inside.

Some NBA players didn’t want to resume the season after Minneapolis police killed George Floyd. They decided to play, but with most players kneeling during the National Anthem and wearing Black Lives Matter T-shirts during pregame warmups.

A day after Blake was shot, Hill expressed frustration with the players’ inability to make a difference while playing games in the bubble.

“We can’t do anything,” Hill said Monday. “First of all, we shouldn’t have even came to this damn place, to be honest. I think coming here took all the focal points off what the issues are.”

The Bucks-Magic game was supposed to be the first of a playoff tripleheader, which includes Rockets-Thunder at 5:30 p.m. and Lakers-Blazers at 8 p.m.